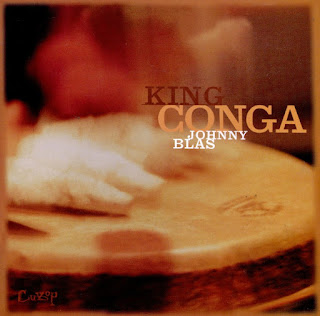 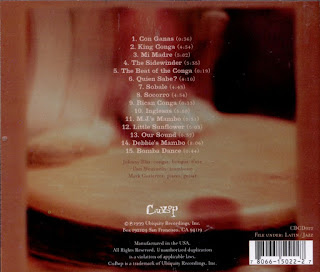 
Seven years into his career, percussionist Johnny Blas continued to propel the Latin
jazz idiom further into the 21st century with some of the most exquisitely arranged,
consummately executed music the genre had heard in some time. Not a major departure
from his first two albums with Ubiquity's Cubop imprint (1997s Skin & Bones and 1998s Mambo 2000),
King Conga nonetheless maintains the standards of those sets.
Joining Blas once again are guitarist/pianist Mark Gutierrez
and trombonist/violinist Dan Weinstein: linchpins of the percussionist's
combo since his 1995 debut, A Night in L.A. In addition to lending their
substantial improvisational skills to the date, they combine with Blas to
form a formidable writing trio. Percussionist Angelito Rodriguez also makes
impressive contributions, sharing credit with Blas on five cuts. It's worth
noting that King Conga's eight originals (not counting the tasty percussion
interludes sprinkled throughout) are more than capable of holding their own
alongside Freddie Hubbard's "Little Sunflower" and Lee Morgan's "The Sidewinder,"
the second and third cover

versions ever recorded by the group. Album highlights include "Sobale,"
an up-tempo track that adds both flute and violin to an otherwise trombone-heavy mixture;
"Socorro," a soft-stepping ballad adorned with a rich string arrangement by Weinstein;
and "Debbie's Mambo," a lively eight-minute track presumably dedicated to Blas' wife.
The latter features an outstanding arrangement for the band's four trombones and an inspired
(and slightly deranged) piano solo from Weinstein. This is Latin jazz (circa 1999)
at its very best.
Posted by edgar music at 12:30 PM