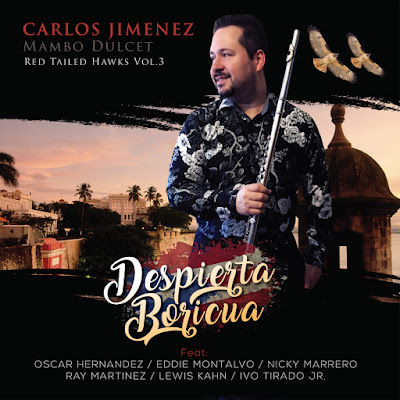 
A new collaboration of Legends making Vol.3 of the Red Tailed Hawks a
dedication to our beautiful island of Puerto Rico.

Musicians on this Single Album features


Yonkers, New York native Carlos Jimenez is the next generation of extraordinary
flute players. He follows in the footsteps of greats such as Dave Valentin,
Jose Fajardo and Nestor Torres.
Carlos’ musical passion began at the age of four, when under the guidance
of his father he learned to play the trumpet. The family returned to Villalba,
Puerto Rico where there then six-year-old musician continued his
musical training eventually landing him admission to the prestigious
Fransisco Zayas Santana's High School where he studied with the famous maestro,
Professor Pablo Leon.

In 1995 Carlos returned to New York City to study at the Music
Conservatory of Westchester. There he expanded his repertoire
to jazz studying with master musicians Dave Valentin, Hilton Ruiz,
Mario Rivera, Bobby Porcelli, Sonny Bravo and Mike Longo.
Has recorded and produced eight albums.
at 11:20 PM
Email ThisBlogThis!Share to TwitterShare to FacebookShare to Pinterest
Newer Post Older Post Home